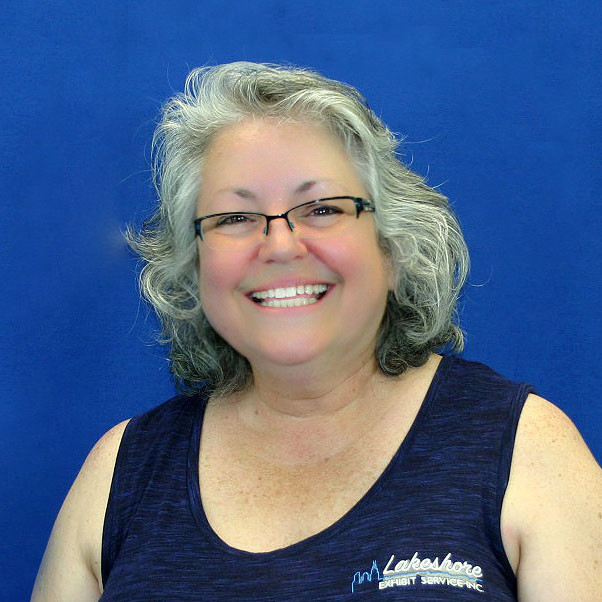 “I can do all things through Christ which strengtheneth me.”
—Philippians 4:13

In May 2015, Mary ran into Rick, Carl, and Larry at the National Restaurant Association Show. She approached them and mentioned she was looking for another tradeshow company for a merger. Rick responded, “We’ve been waitin’ for ya.” Six months later, Mary merged her business with Lakeshore Exhibit Services.

Mary quickly outgrew her cubicle at Lakeshore and when Carl retired, Rick asked Mary to become a salesperson. Initially, Mary was not pleased with the idea because she disliked the mentality of most salespeople and she didn’t want to adapt it. It took some convincing but Mary eventually transitioned to sales while maintaining her friendly, caring, and honest approach to the tradeshow industry. She is an atypical salesperson who really cares about her clients, which she proved her first year by doubling her sales. The majority of the Mary’s clients have been with her for years and she has loved helping and watching them grow over time. Mary loves Lakeshore Exhibit Services so much that she comes into the office every day. She says, “I don’t have to be here. I can work from home, but I love to be here.”

Mary loves to boast that 80% of her clients are women! Her clients love speaking with a very knowledgeable female in a widely male driven industry.

Mary loves the Christmas holiday. Every year for the Lakeshore Exhibit Services holiday office party, Mary bakes all of the desserts for the day!